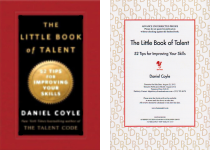 For those following along at home, it's been quite a while since I've knocked out a book review. As noted elsewhere, one of my consulting projects has expanded to a full-time gig, and, being a start-up, “full time” has been running 12-18 hours a day!

I almost wrote a review for the current book a month or so back, but the cover (as you can see in the “double” pic, this came to me as an ARC - advance reading copy) asked to not run reviews before the on-sale date, which was earlier this week. This was one of the LibraryThing.com's “Early Reviewer” program books, and, instead of cranking out a review for the LT site, and sitting on it for a month, I put it aside, but figured out of the dozen books that have gone un-reviewed over the past month or so, I'd get this out first.

Anyway, the #1 take-away from Daniel Coyle's The Little Book of Talent: 52 Tips for Improving Your Skills is that it is, indeed “little” … of the 52 sections, only one (at 7) is longer than 4 pages, and many feature under a half-page of text (the shortest is a mere 3 lines). The book is structured in three thematic sections, “Getting Started”, “Improving Skills”, and “Sustaining Progress”, plus interesting introductory material and appendix. Needless to say, it is rather a fast read.

Coyle had previously produced a book, The Talent Code which involved him traveling around the world researching places where talent and training came together to produce excellence:

... a new view is being established, one in which talent is determined far less by our genes and far more by our actions: specifically, the combination of intensive practice and motivation that produces brain growth.

As he visited these various schools, centers, etc., he kept jotting down notes that he felt would be useful at home, and that is the basics of what is in this book.

It's hard to summarize the book in detail as the material arises from such a wide spectrum of sources, but, in general, it follows a general theme expressed as: “Small actions, repeated over time, transform us.” So, this goes from the very basics like “buy a notebook” or “end on a positive note” (that's the topic of the 3-line chapter), to fairly specific regimens like the one that recommends practicing something, taking a 10-minute break, practicing it again, taking another 10-minute break, and then practicing it again … which the National Institutes of Health suggest is an optimal pattern for brain retention.

One thing that I found particularly fascinating was the appendix dealing with research into the Myelin sheathing in the nervous system:

Every time you perform a rep or a reach, your brain adds another layer of myelin to those particular wires. The more you practice, the more layers of myelin you earn, the faster and more accurately the signal travels, and the more skill you acquire.

Action is vital. Myelin doesn't grow when you think about practicing. It grows when you actually practice – when you send electricity through your wires. … Studies have linked practice to myelin growth and improved performance in such diverse skills as reading, vocabulary, music, and sports.

Although one is very tempted to assume when encountering the number 52 that this book is set up for a weekly exercise, Coyle doesn't suggest that, and (as noted) some of these things are so basic (the notebook) that it's hard to imagine one practicing it for a week to get that particular tip set as a habit. But there is that structure that moves through definite stages. I found the utility of the things in here all over the board, from ones that I felt were brilliant to one that seemed a bit too “process” for general use. Overall, however, it's a very inspirational book, and I'm planning on getting a copy of its predecessor.

As The Little Book of Talent has just hit the stores, you should be able to find it pretty much anywhere … although its cover price is fairly steep for such a thin volume. The on-line big boys have it for a substantial chunk off of that, so you might want to consider ordering it if you want to save several bucks. I do recommend this highly, though, as the suggestions in it are likely to be helpful for anybody to improve on whatever they're attempting.