This wasn't something that I sought out, although I certainly knew the author from his late-night show Red Eye from back when I was up all night, every night, but was only sort of vaguely aware that he'd published books (he has four out in his current role as a punk/conservative gadfly, plus one from a previous manifestation). However, when I saw Greg Gutfeld's mug staring out at me from the dollar store shelf a couple of months back, I was pretty quick to toss The Joy of Hate: How to Triumph over Whiners in the Age of Phony Outrage into the shopping cart.

Frankly, if I were involved in the editorial/marketing process on this, I'd have fought for a different title … sure, “The Joy of Hate” is semi-cute, playing on iconic books such as The Joy of Cooking and The Joy of Sex, but it's not that cute, and really doesn't reflect the main thrust of the book (unless one takes this – quite possible if one is of the right mind-set – as an invitation for an Orwellian “hate” directed at the objects of the author's derision). A better (or, more descriptive) title could actually be spun out of the subtitle, “How to Triumph over Whiners in the Age of Phony Outrage”, as that's pretty much what the book is about, although, admittedly, rolling it around in my head, I wasn't coming up with anything particularly catchy to suggest as an alternative. 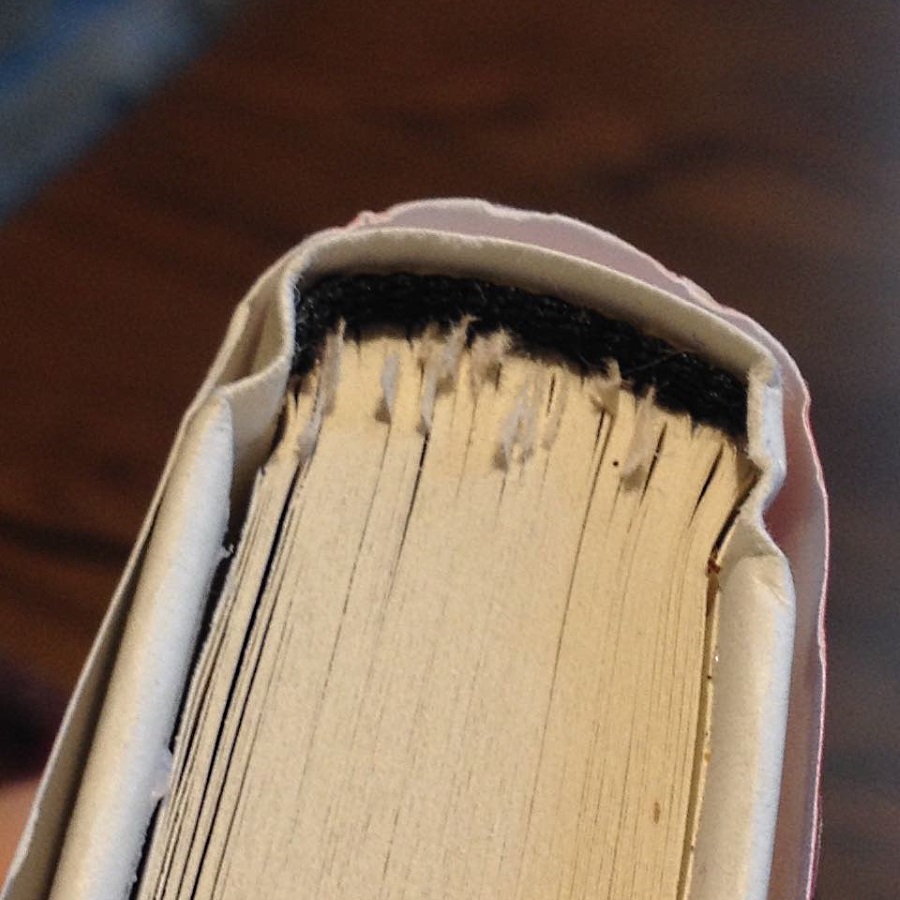 Gutfeld is a bit of an acquired taste, as his shtick is sarcastic, smarmy at times, and laced with a lot of fairly bizarre bits of self-deprecating humor. He also tends to spew out somewhat rambling rants here, making it challenging to pull out pithy quotes (although, as you can see from the picture over there ==>, I did manage to plant a veritable forest of my little bookmarks in it). As noted, the book deals with the “whiners” (liberal/left types) and the ever-present “Phony Outrage” they (and the MSM) are so fond of promulgating. Gutfeld distributes his 225 pages across 27 areas where different varieties of this “outrage” get expressed – generally orbiting around a concept that he describes as “repressive tolerance”, the Left's eagerness to embrace anything that is destructive to how America has been much of the past century or two, and unwilling to allow for anything that disagrees.

To be honest, this was a very uncomfortable read for me, as the stuff that Gutfeld shines his snarky light on are exactly the type of things that keep me from watching the MSM … or, have me screaming at the TV if I make the mistake of actually exposing myself to the so-called “news” shows … and so walking through this particular mine field was an adventure in spiking blood pressure and intense teeth grinding. It would probably have been “more fun” if there was an organized “hate” for each of these … not only pointing out how monstrously hypocritical the Left is in their intolerant “tolerance”, but also having a good stress-releasing go at them! Of course, that's me, and I'm, if anything, angrier than Gutfeld at those sorts of morons, so consider your placement on the left-right scale before you opt to go venturing into The Joy of Hate, because if you're “on the other side” you may well find some of your most cherished group-think beliefs made fun of, if not gored like the proverbial sacred cow.

It probably wouldn't be overly useful for me to list the topics, and certainly not the chapter headings (which are delightful, but more evocative than descriptive, from “Working at the Death Star” which is about his career at Fox News, on to truly delightful ones like “I'm OK, You Should Die”), but suffice it to say, he covers a lot of territory, pretty much hitting all the possible hot spots of Lefty intolerance for anything that doesn't agree with their world view. So, I guess I'm going to take a little walk through all those bookmarks, and cherry-pick bits and pieces to give you a sense of what's in here.

Let's start with a sample from the Introduction:

The media, for the most part, tends to dismiss the “outrage” perpetrated by the left, often dismissing the slurs and smears as the product of “edgy comedy”, only because they rabidly agree with whatever's being said. … This liberal pass, however, is not afforded to those on the right. If Maher calls somebody a slut, the outcry lasts a few days. When Rush says it, the outrage lasts as long as a case of herpes. It flares up and never really goes away ...

He goes on to note

... because of tolerance, there are no repercussions for bad behavior. And bad behavior won't just continue, but will accelerate, because the tolerati … provide the grease for the wheels.

In the nicely alliterative “The Bigot Spigot” chapter, Gutfeld describes the health care bill's being “rammed through Congress like a torn-up dollar bill in a Coke machine” as making “Caligula's method of government seem positively modest” … which does beg for various lines of comparison being drawn to the current administration and its co-conspirators!

The next bit is a longer grab since I couldn't ellipsis it enough to make it pithy and short, but it has a good message (in the chapter dealing with various ways the Left has attempted to “spin” repeated Islamist attacks into categories that better fit their on-going narrative):

Now, somehow I just don't think viewing these threats as potential examples of workplace violence is going to be our most effective method of attack. What are we going to see on the walls next to the “no smoking” signs? Posters that exclaim, “No massacres in the name of Allah”?
Fact is, we are living under a government that's head over heels in love with euphemisms. Whether it's “man-caused disasters” or “workplace violence”, our leaders can't stop creating new lies out of old words. Taxing the rich is now “paying our fair share”. Class warfare is now called “a war on inequity”. As I've said before, calling the Fort Hood massacre workplace violence is like calling Pearl Harbor an air show.

… and you get the idea that had that attack happened under the current POTUS, his vile administration would call it a freaking “air show”!

The above-mentioned “Death Star” chapter has lots and lots of good bits, but you don't want to have me type out pages of quotes, do you? Here, however, are a couple of choice ones:

Freedom of expression and tolerating points of view are {whiny liberals'} expressed desires … unless you, um, disagree with them on something. Then it's sooo over, you Nazi!

All entertainment options came saddled with {liberals'} approved assumptions: Movies, theater, the art world, magazine publishing, newspapers, comedians … – you name it – they all uniformly turn left as if they're performing in an ideological NASCAR event.

… which is one of the best lines in here! He goes on to discuss having Leftists on Red Eye, etc.:

Because I'm confident in my mission, presenting liberal perspectives should only make whatever else that much stronger. Seriously, put a leftist on any show and you see how much more sensible the right is. You have me sitting there sounding reasonable and anyone to my left morphs into one of those LSD experiments from the fifties ...

Fun. One of the useful rules of thumb he comes up with there is this gem: “Whenever you see the word dialogue in a political context, you are in the presence of pure, unadulterated bullshit of the liberal variety.”, which he then points out in any subsequent bit that involves the d-word.

In the “I'm OK, You Should Die” chapter he goes on about the gross double-standard of “wishing ill” on one's ideological opponents. He cites numerous examples where those on the conservative side slipped into this zone and got roundly chastised by their fellows, which leads into:

If you're going to be intolerant of that kind of thing when it's said about people you like, you gotta do the same for those you don't. … The left isn't so consistent. You can wish death or ill will on anyone from George Bush to Sarah Palin, and you'll probably get a grin from every liberal blogger, comic, and talking head. But say anything like that about a precious liberal icon and you will be run out of town.

In the also delightfully-titled chapter “Stalin Grads”, which largely deals with the cretinous Occupy Wall Street “movement”, there is the one point in the book where the author drops the “ironic” filter and goes direct:

But historians know: What begins as a utopian vision always – always – ends in bloodshed. Because you have to force utopia on a free people. Free people want to pursue their own happiness, but a one-size-fits-all approach requires herding the free, against their will, into the state's idea of what's right. Then it's not utopia. It's Uganda. It's 100 million dead. … And it's not like the folks behind the {Occupy} movement have hidden their intentions. …

Finally, here's one bit about how the left gets to be as violent, racist, and misogynistic as they want …

What's truly amazing is how the left seems baffled by the revulsion it causes. … To them it's daring comedy. Why is that? It's because liberals are surrounded by liberals all day, and so they develop a massive blind spot concerning what's acceptable to everyone else … you essentially spend all your time around people who share your assumptions, which makes it exceedingly easy for you to say what's on your mind.

I'd mentioned that there's a lot of self-deprecating humor in this, and a number of the ellipses inserted in the quoted bits above were to present the concepts without the sidebars, but I guess I'd be remiss if I didn't put in at least one example. This is how the “Harmed Forces” chapter starts:

I love a man in uniform. And I'm not talking about my house-boys (sarongs hardly qualify as a uniform). But for the left, tolerance is rarely afforded to the military.

Most of these involve his stature, bad habits, and assorted sexual elements … which I figured I could spare you. Again, The Joy of Hate is not a read without challenges, as Gutfeld is strategically “in the face” of the reader, making it somewhat uncomfortable for all (well, I'm sure whackjobs like Pelosi or Feinstein would really get their panties in a wad over this, while fundies like Huckabee somewhat less). One of the more interesting personal stories here is how the author was a Punk, and has numerous notables from the music biz name-checked … so on one level I guess he's channeling Johnny Rotten's attitude here.

The paperback of this is still on the on-line big boys' sites at very nearly full retail, so I guess I lucked out hitting the hardcover at the dollar store (which gets stuff being rotated off of Walmart's shelves) when I did. The latter has, as is frequently the case, found its way to the new/used vendors' listings, with many “very good” copies to be had for a penny plus shipping … were this sounding like something you'd like to check out.