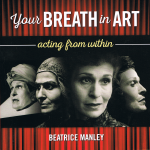 I'm a bit late getting to this one – as it came to me via the LibraryThing.com “Early Reviewer” program, and we're supposed to get the review done within 3 months … this title having come from the May 2017 batch. Oops. Anyway, I was somewhat surprised to have “won” this, as I ticked the “request” box on it largely due to Daughter #2 being an aspiring actress, and I figured it would be something that might be beneficial to pass along to her, as I have done on some other books previously. I think it's fair to say that Beatrice Manley's Your Breath in Art: Acting From Within is something that I would have been highly unlikely to have picked up had it not been for this particular conjunction of elements, but I found it a pleasant read nonetheless.

As is usually the case with LTER selections, there wasn't a whole lot of info about the book provided up front, and I found it odd that a book was coming out “new” by an author who had passed back in 2002. As it turns out, this is a new edition of a book she'd published in 1997 as My Breath in Art, and is something of a 20th anniversary edition (although there is no editorial material in the book to indicate this beyond the data on the copyright page). What I had somewhat expected to be a manual of the author's acting technique (which, certainly, it is on some levels), turned out to be quite the melange … obviously it has the acting elements, but also almost a yoga treatise on the use and function of breath, a lot of humor, pop cultural references (circa the mid-90's), and war stories from both acting and teaching acting.

Being the lazy sot that I am, I was really hoping that there was going to be some grand unifying statement here that I could pass along to you without the effort of much processing on my end, but no … the following (the start of Ch.1), however, pulls together some of the essential threads of the book:

Whenever our acting takes an unpredictable, magical turn, it is because, somehow, the breath has touched our intuition and come up with what had been hidden in our thoughts and emotions.
The breath is both unconscious and conscious, involuntary and voluntary. The breath works in secret; even if we don't breathe it breathes. …

This, trailing the opening quote for the chapter, simply attributed to “Star Wars”: May the Force be with you. Chapter 1 is on “The Breath”, and she goes into expansive detail on concepts about breath, and suggestions of exercises to attempt to get a more significant awareness of it. A line that starts section four here grabbed my attention as one of those “teaching” things that seems to express a hard-won idea: “We will never know when the mind will grasp a concept and the body will master its technique.” … more esoterically (if in the theatrical arena) is this:

Speaking of esoteric, here's a bit from Chapter 2, “The Way of Words”: “Vowels and consonants have their special place on the tongue and at the lips and the teeth.” … this chapter is filled with extremely detailed minutia on how to present words, parts of words, and how they function in our speaking/breathing apparatus. She also gets into some cultural history, quoting authors, actors, and poets, and critiquing some famous actors' performances in particular roles.

Chapter 3, “Letting the Body Do It Also”, has numerous fascinating looks at how assorted actors manifested stage presence as well, with analysis of what's going on. This part, naturally, also relates to the breath, at one point noting:

Athletes talk about getting the mind out of the way so that something can take over. The athlete said: “I can't concentrate when I think.” The body has to be let alone to do whatever it does, its own way. …
Muscular tension anywhere in the body can spoil a performance.

The next chapter, entitled “Learning How to Learn” (which is also the name of a fascinating book by Idries Shah), begins with a long letter that she “wrote and never sent” to her students. This deals a lot with overcoming various blocks. There are quite a few choice bits here, including:

The desire to perform is very great but it is often mixed in with self-consciousness and embarrassment. A part of the body shrinks back from its own presence; there is a pulling away from the gesture as soon as it's made.

If we let the critic in us take over, it will eventually paralyze us. There is a place in the body, an actual place, that each person's critic inhabits and which smothers natural talent.

Aside from discussing these topics, she additionally sketches out some exercises to use for getting over these blocks and related physical and psychological stressors … and recommends a “lab coat attitude” where, like a scientist, the actor experiments with these, and “continues to make changes until the right formula is found”.

The next couple of chapters, “Technique” and “Doing Nothing”, are each under ten pages. The concept of technique here is a bit like the body skills learned to ride a bike, and her thrust is on having these skills as baked-in as that. The most direct part here is:

Technique is nothing but redeeming natural behavior, getting rid of physical tensions, cleaning out emotional garbage. All this so that we can find our way back to simplicity. When we reclaim our innocence, the self without fear or exaggeration, we are talented and intuitive and imaginative and creative and integrated.

She returns to Star Wars references in expressing the concept of doing nothing: “… Obi Wan Kenobi tells Luke to use The Force; that now he must let go of his conscious self and act on instinct.” While there are exercises suggested, the essence here comes through, I think, in a few lines, like “Doing nothing lets the intangible happen.”, and “If simplicity makes us feel stupid, ambiguity can make us crazy: don't make something happen, let something happen. … And the ultimate in ambiguity: don't try, but don't try to not try ...” which she follows up with this gem:

While Chapters 5 and 6 are quite brief, Chapter 7, “The Acting Chapter”, takes up (as one might expect, I suppose) nearly 30% of the book. This is broken up into three parts, “Helpful Hints”, “28 Little Essays About Acting”, and “Thinking About the Script”. The first of these is sort of “nuts and bolts” of the acting craft, looking at auditions, rehearsals, and working with directors, with one rather odd topic of “The Nose”:

Notice how often people touch and scratch their noses. The habit is so strong that I've seen performers rub their noses impulsively in the middle of a scene. It's one thing to need to blow one's nose, it's another to grab at it because the nerve endings are screaming for attention.

The 28 essays are brief, ranging from a couple of lines to a couple of pages, and are all over the board as far as subject matter. Number 21, “No Tempo”, has a great bit part-way through it: “George Burns said he didn't go on the stage to wow them. He went on stage.”, which itself sounds a bit like a Zen teaching story … and number 28 is a generally useful “What to Do with Our Hands”, which has rather pointed stage-presence reasons to do or not do specific things with one's arms and hands – including this item: “Clint Eastwood said he took a lot of acting lessons to do nothing, to just stand there.” Part three begins with another interesting quote, this from Anthony Hopkins: … Once you've learned the part – and I try to learn the whole film as much as possible – you've got the whole recipe inside you so your mind can make unconscious decisions … . While most of the rest of the book is broken up into small, often paragraph-length, sections, this part is set up pretty much as one substantial essay about scripts, and relating to and working with them.

The last three chapters are back to being fairly brief. Chapter 8 on “Oral Reading” is a delight for the writer in me, with lots of poking around in the guts of the language, and quotes like: “If we observe the punctuation we needn't struggle with the material.”, which is followed by a passage from Edward Albee getting very detailed about the nature, and expression intended, in punctuation; and then discussed by Manley in relation to her experiences, including suggesting that in one of Samuel Beckett's plays “the author was acting the role on paper”, and that “When I followed his punctuation, I arrived at the emotions he intended.” She also discusses pacing and refining technique, comparing what athletes do (“working on that single flaw, over and over”) to what she feels actors ought to be doing, as it's what “separates the champions from the merely talented.”

Next is Chapter 9, “I Remember Fear”, which delves into various examples of working around one's fear, frequently expressed as elements of roles the author played. I liked this bit:

There are no guarantees. The hardest thing in acting is to accept that we can't control or capture a performance, that we must find ways to let a performance alone, to let it be the words and gestures, the physical expression of thoughts. …

The last chapter, #10, is “Fame!” and is quite brief, just a few pages, and looks at fame from a philosophical stance, quoting a couple of well-known names, and closing with another George Burns quip:

… I don't try to be a hit. I don't sweat. I walk out there and take it easy. I find that if I take it easy, the audience takes it easy. If I sweat, they sweat. If we both sweat, we don't smell good. …

This is followed by an appendix of “Basic Exercises” (in 10 categories), which are fairly technical … for example (pardon my skipping the bits with the actual vowel patterns):

I hope from the preceding you've gotten a sense of Your Breath in Art … as I said, it's quite a mix of stuff, and engaging all the way through. This new edition (from a new publisher) came out at the end of May, so it should be available either at or via the brick-and-mortar book stores that handle this sort of title … which you might as well go to for it, as the on-line behemoths are presently not knocking anything off the cover price. Again, I found this quite a fascinating and enjoyable read, and would recommend it to anyone who resonates with the above.